The Beauty of Vietnamese Conical Hat or Non La

Considered as one of the most unique and attractive instruments, the sound made by Dan Bau is extremely rustic and tunable but can touch the bottom of the heart of every audience. The uniqueness of this instrument comes from its simple structure. Just one string can express every level of tone and emotion; bring strange charms for each song and melody. 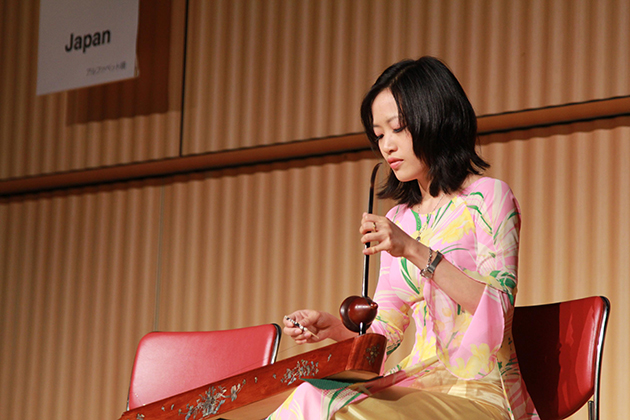 To make an ideal instrument, materials must be carefully chosen. The surface of Dan Bau needs making from shiny wood guaranteeing enough lightness to create the necessary resonance. Mahogany is often selected to make the frame because of its beauty and durability. The string used to be made of silk but now iron instead.

This instrument is widely used in folk music as well as royal arts in Vietnam. The sound from Dan Nguyet is clear, vibrant, and able to adapt diverse performances from excitement to deep thinking. Therefore, the musical instrument often appears in solemn ceremonies, charismatic singing, emotional funerals as well as elegant operas with different performances such as accompanying or solo. 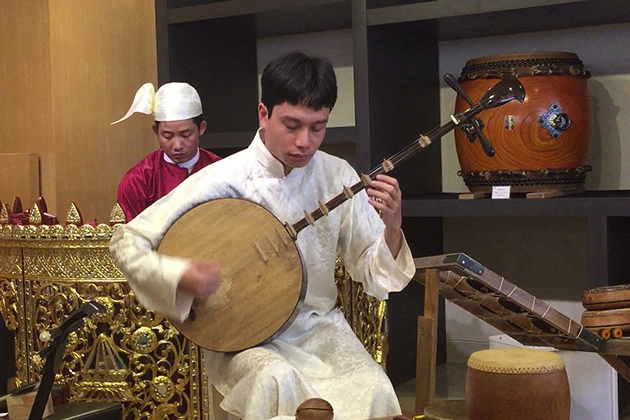 Dan Day, in the past, used to be an instrument for accompanying two traditional arts: Cua Dinh singing and A Dao singing. It is the bass instrument which has a long neck as well as high frets. Ngon Chun, a unique technique (reducing the sound with fingers) helps the player lower the melody. What makes this musical instrument different from other musical instrument is the warm, dull but short sound creating the contrast to accentuate the voice of singers accompanied by the instrument. Nowadays, Dan Day is used additionally for accompanying poems attracting the attention of many tourists. 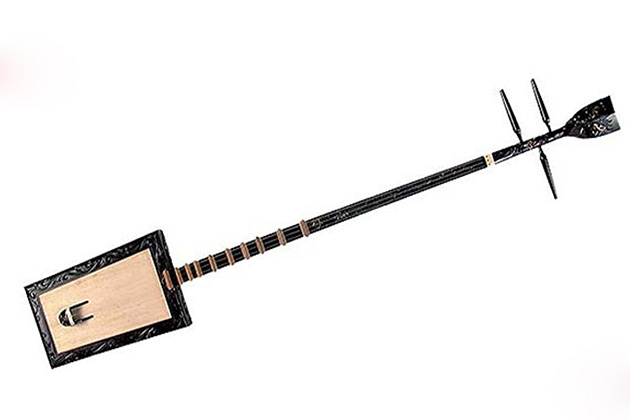 Despite the simplicity of the look, Dan Nhi can obtain greatness. It is said that all traditional arts in Vietnam from folk songs in the North to Cai Luong in the south will lose a lot of its attractions and glamour unless accompanied by this wonderful instrument. Dan Nhi has two metal strings and the bow made of wood or bamboo and fitter with horsehair. The body of Dan Nhi is made of hardwood together with snake or python skin while its neck has no fret. This instrument has two pegs for tuning. Various techniques must be used by players consisting of vibrato, staccato, legato together with strings to produce glissando, rapid runs, and trills, etc. 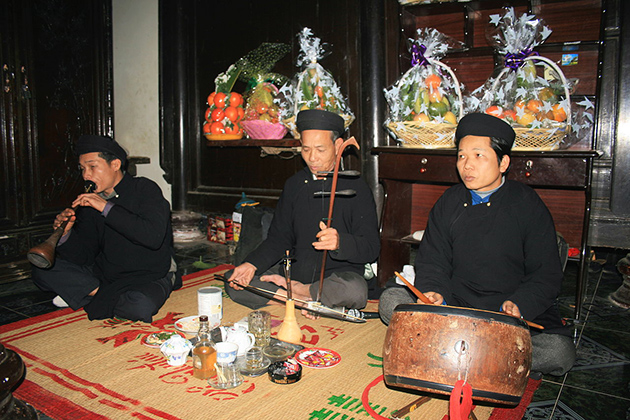 This trumpet is commonly used in weddings, funerals, celebrations and especially in Nha Nhac (Vietnamese Court Music). Ken Bau has many versions based on regions and uses, mainly classified into three types: low-sound trumpet, medium-sound trumpet (most popular) and high-sound one. The special part of Ken Bau is its bell made of the dry peel of gourd (“Bau” means gourd). The sound of Ken Bau is strong, resonant, and high-pitched so only men can play this trumpet. The instrument is best at expressing emotions, sometimes happy and bright colors, sometimes gloomy and tragic ones. 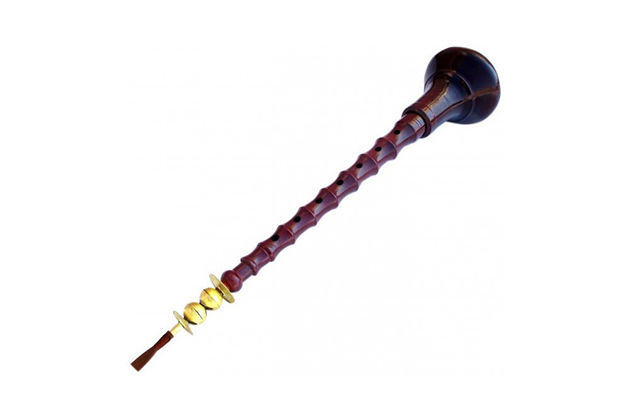 The flute is made from a segment of bamboo carved an oval hole to blow in one head and six other holes along the body to adjust the sound. When playing Sao Truc, the flute’s body is placed horizontally to the right and the mouth is placed on the oval hole. The airflow can be adjusted by pouring the steam slowly and strongly to produce different tones. Sao Truc is often used in solo, orchestra, and many traditional arts.

Besides Gong, T’rung is one of the common musical instruments closely connected with the spiritual life of ethnic minority peoples in Central Highlands of Vietnam. The instrument consists of several parallel bamboo pipes, one head is closed, the other is crossed. The number of pipes used to be 5 or 6 but now can be about 9 or 10. When performing, the artist uses two bamboo or wooden bats to tap on the pipes. In the past, locals play T’rung for entertainment after hard-working days or prevent the crops from wild animals. At present, T’rung becomes famous worldwide because of its exciting melodies like the “breath” of pristine nature. 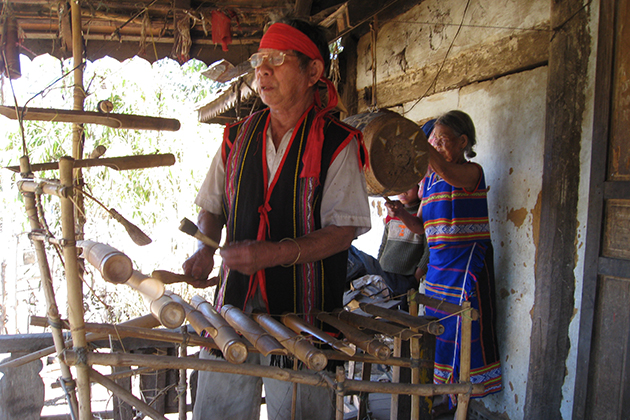 The instrument is the series of stones of diverse shapes and sizes selected and fabricated through the skillful techniques. According to many historical documents, the most ancient Dan Da is estimated to exist for over 3,000 years. In performances, the artist uses two small hammers to hit the stones to make clear and sweet sounds. Enjoying Dan Da brings you to the scene of a dreaming stream, an immerse jungle of birds singing and a vast field full of wind and green grass. 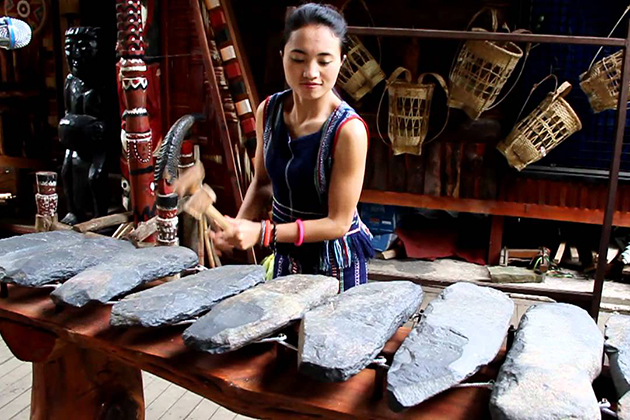 Dan Tranh began to take shape in the Vietnamese traditional music instruments orchestras in the 11th century.  In the late 13th and early 14th centuries, Dan Tranh had only fourteen strings so it was called “14-string zither”, but then by the late 1980s, Dan Tranh with 17 strings appeared, so it changed the name into “ 17-string zither” and become the standard version of this instrument. Larger zither with 22, 24 and 25 strings have also been made in the 1980s and 1990s. Dan Tranh is a plucked zither of Vietnam, which has a curved shape. The soundbox consists of a curved top plate, a flat bottom plate, and six side-pieces.  From the axis to the position connecting strings, there are some movable bridges. The higher their position, the smaller their size is. The strings are made of steel and have varying diameters. They are tuned to the pentatonic scale. Performers usually wear picks made of metal, plastic, or tortoise-shell to pluck the strings. 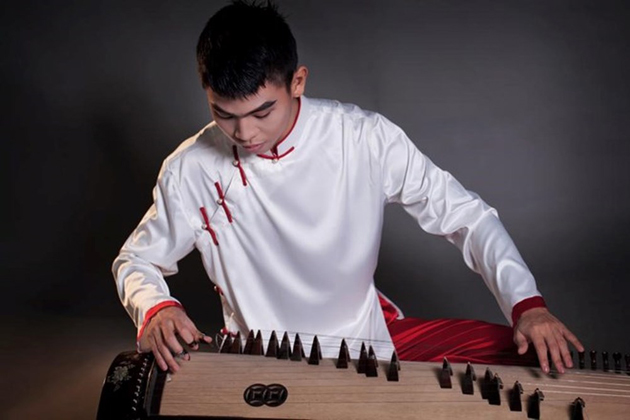 A “Trong Com” or “Rice Drum”, is a kind of traditional bongo-shaped Vietnamese drum. Why it is called “ Rice Drum”? The answer is that before using, the musicians have to put the hot rice mash to the surface of the drum to adjust the pitch of the sound. Trong Com is often made from a hollowed piece of wood approximately 56-60 cm long. Two surfaces at both ends of the drum are wrapped by buffalo skin. A system of leather or rattan strings like a lattice covers the drum in order to adjust the sounds of the two sides. As an orchestral music instrument, Trong Com is used in ceremonial customs and “ Cheo” orchestra with a resonant, deep and slightly opaque sound. 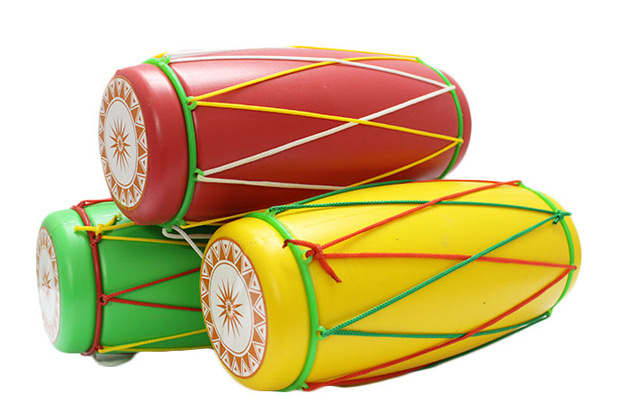 Cong Chieng or Gong is a musical instrument with copper alloy, sometimes with gold, silver or black copper. This instrument is available in a variety of sizes, ranging from 20 to 60cm in diameter, the biggest one can be from 90 to 120cm in diameter. With the Muong and many ethnic groups in Tay Nguyen, Cong Chieng has a great meaning and a high value. In general, Cong Chieng is sacred musical instruments, which mainly used for ritual sacrifices, funerals, weddings, new year celebrations, new rice festivals, and agricultural rituals. The Cong Chieng Tay Nguyen Culture Space was recognized by UNESCO as a masterpiece of oral tradition and non-humanity on November 25, 2005. 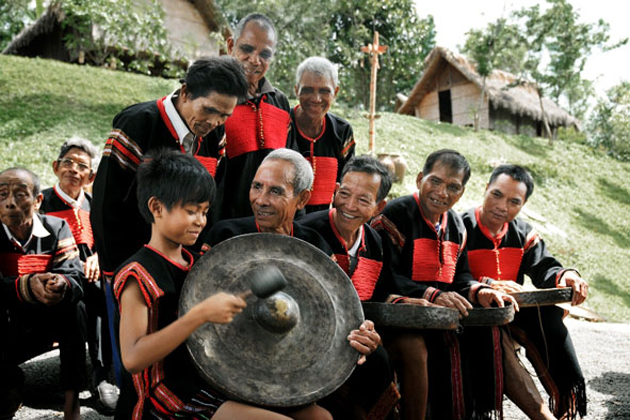